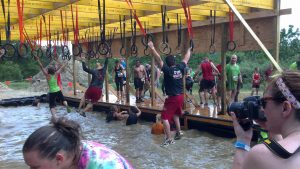 Staying physically fit isn’t just good for your health. It’s also a good way to beef up your brain, according to new research.

Led by Laura Chaddock-Heyman, a research scientist at the University of Illinois at Urbana-Champaign’s Beckman Institute, a team of researchers found greater aerobic fitness is associated with more fibrous and compact white matter, a type of nerve tissue connected to learning and brain function. Previous research has shown more compact white matter fibers can lead to improved cognitive performance.

“Our work has important implications for educational and public health policies, as sedentary behaviors and inactivity rise and physical activity opportunities are reduced or eliminated during the school day,” Chaddock-Heyman says. “Hopefully these findings will reinforce the importance of aerobic fitness during development and lead to additional physical activity opportunities in and out of the school environment.”
The researchers used a type of magnetic resonance imaging (MRI) to look at five different white matter tracts in the brains of two dozen 9- and 10-year-olds, half of whom were more physically fit and half were less fit. White matter also works to carry nerve signals between different parts of the brain, and all of the tracts examined have been associated with attention and memory, the study says.

Just one-quarter of American youths currently engage in the recommended amount of daily physical activity, according to the Centers for Disease Control and Prevention. That can have a negative impact on their academics, research has shown.

Previous research shown improved fitness can boost students’ memory and learning, but this new study is the first to show a connection between physical fitness and brain structure during childhood.
“We know from previous work that higher fit children outperform lower fit children on tasks of attention, memory and school performance,” Chaddock-Heyman says. “Thus, it is possible that white matter structure is another pathway by which fitness relates to improved cognition.”

The study was published Tuesday in the journal Frontiers in Human Neuroscience. Moving forward, the researchers plan to conduct a five-year study to determine whether children’s white matter structure improves when they start and maintain a new physical fitness routine.
“Be smart, and exercise your heart,” Chaddock-Heyman says. “High levels of physical fitness are not only good for one’s physical health, but one’s cognitive and brain health as well.”

This is a great article written by Allie Bidwell, Staff Writer at USNews.com. The research supports that children and adults alike tend to learn better when they have consistent physical activity throughout the day.