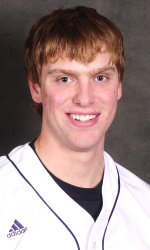 LEWISBURG, Pa. – For the third time in the last four weeks a Bucknell starting pitcher has been named the Patriot League Baseball Pitcher of the Week, the league announced on Monday. This time it was junior left-handed starter Ryan Ebner (Sinking Spring, Pa./The Hill School), who pitched seven shutout innings in a 14-0 win over Butler last Wednesday.

Ebner joins Jack Boehm (Feb. 28) and Trey Frahler (March 14) as Bison hurlers to be named Patriot League Pitcher of the Week this year.

In his first year as a regular starter, Ebner was staked to a 9-0 first-inning lead against the Bulldogs and held them scoreless for his seven innings on the mound. Butler managed just four hits against Ebner, who struck out seven and combined with Taylor Runge and Jack McLinden on Bucknell’s first shutout since last May 2.

Ebner, who is tied for the team lead with two wins this year and is third on the squad with 16 strikeouts, has allowed just one earned run and seven hits over his last two starts (14.0 IP).

Solid pitching has carried the Bison of late. They have a team ERA of 2.66 since the end of the season-opening four-game series at James Madison. Ebner has a 2.00 ERA over that span.  If you are looking for help with your baseball game, contact us at 610 334-4120.