How to keep your New Year’s fitness resolution from failing 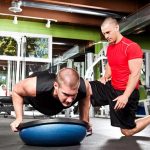 If you’re like most Americans, you’ve made getting more fit and losing weight your New Year’s resolution to kick off 2017. Unfortunately, your resolution will most likely fail.

According to a study from the Statistic Brain Research Institute, roughly 42% of Americans made New Year’s resolutions for 2017. The most common resolution — made by almost a quarter of every person making one — involves increasing fitness and activity. As people look down at their waistlines after the holiday season, there is a strong desire to get active.
This why the treadmills at your gym are packed this month. But if you’re annoyed at having to wait your turn, just be patient; most of them will give up in the coming months. The study found that of those who made resolutions, 37% of people in their 20s and 16% of those over 50 were successful, meaning they met their objectives. Combined, fewer than half of all New Year’s resolutions were successful six months out. But you don’t need to be one of the quitters. As a sports medicine physician and fitness class instructor, I have found clear strategies for success in maintaining fitness goals all year.

Humans are social animals. The more we interact with others, the more likely we are to modify behavior. Social interaction has been shown to make people more likely to work out. Join a group, such as signing up for a fitness class, joining a local running or walking club, or even hiring a personal trainer.
Also, pre-pay for sessions when possible. Having financial “skin in the game” combined with a commitment to another person means you’re much more likely to stick with your program.
Newer evidence suggests that if you can’t make to a group in person, having a virtual fitness community can increase exercise compliance. Tracking platforms such as FitBit, Garmin and Strava allow people to create social communities and inspire them to work out more.

Commit to a date-specific goal

Goals don’t need to be lofty to be effective. But it’s useful to sign up for an event: a 5K walk, a 10K race, a marathon, a triathlon or even a ballroom dance competition.
When you set a goal, preferably one just slightly outside your comfort zone, you’re much more likely to stick with your fitness program. Pick your goal, register for the event and put it on your calendar so you know where you’re headed.

Fun increases helps people stick with a workout program. A small study published in Germany last year showed that when people were having fun, they were much more likely to stick with their exercise regimen.
I have found this to be true in my fitness classes as well. Even if the workouts are difficult — when it’s 25 degrees outside at 6 a.m. — people show up. As they have reported, the primary reasons are fun and community. Make sure your exercise program is making you smile. If it’s not, try another approach.

If working out doesn’t make you slightly uncomfortable, you’re probably not doing it hard enough. Effective exercise is all about pushing your limits.
But when the aches and pains of starting a new fitness regimen pop up, it’s important to pay attention. Many well-intentioned fitness programs have been derailed by ignoring the discomforts that can turn into more serious injury.

Differentiating between common problems and unhealthy discomfort is important to prevent that mild ache in your shin from turning into a stress fracture.

In today’s world of sports medicine, we’re getting increasingly better at assessing aches and pains through the use of technologies such as X-ray, MRI and ultrasound, and we can figure out ways to prevent these problems from slowing you down. In addition to making muscles stronger and more flexible, experts are able to use newer technologies to figure out the most effective ways to move.

Most of all, just keep moving

Most of my patients don’t win an Olympic medal. Most don’t end up in the NFL, in the NBA or on the podium of the Boston Marathon. Only a few of my patients will win their age group at a local race.

Regardless of where they finish or what they do, each of my thousands of patients who keep moving and striving to meet their goals is a winner.
What keeps these people pushing ahead? Determination. It doesn’t matter if you’re first, last or anywhere in between. The final and most important key to making your New Year’s resolution work in 2017 is 100% mental.

Keep moving, day after day, step after step. Move when it’s cold; move when you’re tired; move when you don’t want to keep going or even get off the couch. The toughest part of any exercise program is getting out the door. Once you get started, it’s almost impossible to stop. This is a great article that was on CNN and written by Dr. Jordan D. Metzl.